The infrastructure bill’s limited state of repair funding and policies

The infrastructure bill’s limited state of repair funding and policies

There is very little new funding in the infrastructure bill specifically dedicated to repair and no new requirements on highway monies for prioritizing repair on roads and bridges. Overall the law doubled down on the practice of giving states immense flexibility with the bulk of their money and then hoping that they use that flexibility to prioritize repair. Advocates should be ready to hold states and metros accountable for making progress.

I-35W in Minneapolis. I-5 over the Skagit River in the Pacific Northwest. Miami’s pedestrian bridge at Florida Atlantic University. The 295 pedestrian bridge in Washington, DC. Last week’s bridge collapse in Pittsburgh, PA. 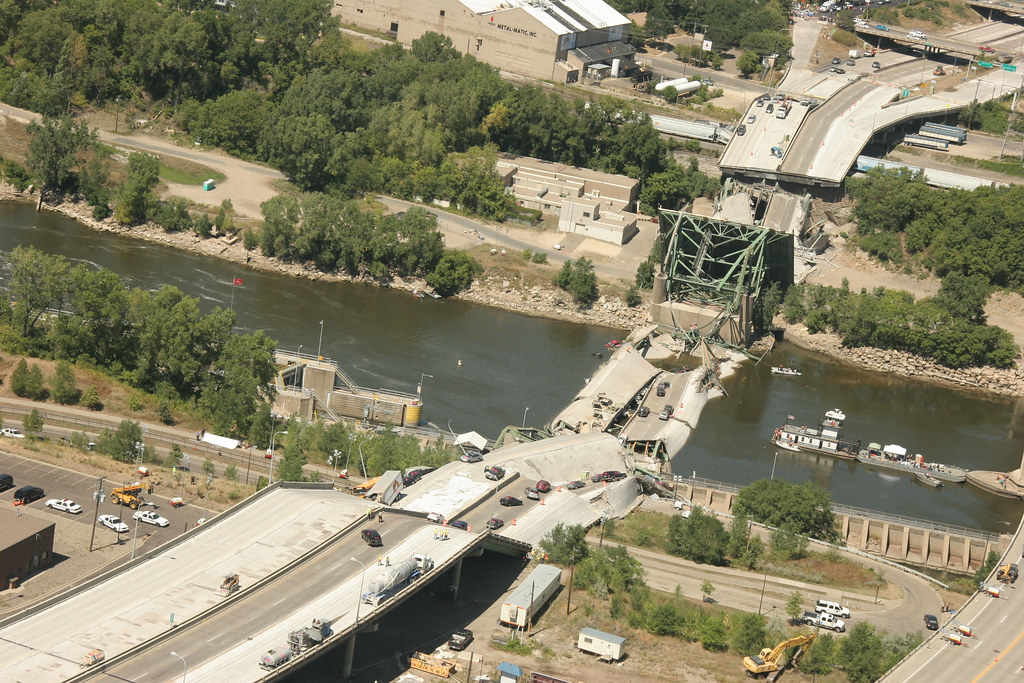 Those are just a few high profile US bridge collapses over the last decade. Many smaller ones have escaped national scrutiny. And of course, who knows how many potential collapses were avoided (good!) through weight restrictions, lane closures, or outright closures that resulted in lengthy detours (bad!).

These collapses all happened for a plethora of overlapping reasons related to engineering, age of infrastructure, design flaws, ineffective inspection systems, and others, but they are also the by-product of our overall reactive vs. proactive approach to repair and our failure to require repair ahead of building new. The House’s five-year INVEST Act would have instituted a fix-it-first requirement, but the Senate and the administration discarded INVEST and ultimately struck a deal to continue the status quo on repair: giving states money and freedom, and hoping they use their discretion to maintain the system.

What’s in the law?

While states are given wide latitude on how to spend their money, they unquestionably will have more money at their disposal for the next five years because nearly all of the core programs that are typically used on repair needs increased in size. There are two major programs worth highlighting:

1) The National Highway Performance Program (NHPP) is one of the two largest sources of funding used for repair—about 53 percent of all states’ base highway formula apportionment (~$147 billion in the new infrastructure law). NHPP funds are intended to be spent on the National Highway System’s roads and bridges, as well as transit or for bicycle and pedestrian infrastructure in an NHS corridor. The easiest way to understand the NHS is that it consists of a spectrum from nearly all multi-lane arterial roads up to interstates, as well as a lot of two-lane rural state highways. Funding for the NHPP went up by 26 percent over the FAST Act, which means more money theoretically available for repair projects if states choose to spend it that way. The infrastructure law did open up NHPP to fund more climate mitigation projects classified as “protective features,” including raising roadways, replacing culverts and drainage, and “natural infrastructure.” Advocates and local leaders—especially in coastal areas—should work hard to make their state or metro area aware that these types of projects are now eligible for NHPP funding. (Relying on the past precedent of emergency aid for repairs after disasters will be risky as climate emergencies become more frequent but funding stays the same.)

2) The Surface Transportation Block Grant Program is exactly what it says: a block grant given to states for all surface transportation needs. This second biggest pot of money states can use on repair is also the most flexible. Not only can these funds be used on repair projects, but they can also go toward transit, biking, walking, and nearly other possible mode of surface travel—though many states do not take advantage of that flexibility. This program represents 23 percent of all highway formula dollars, and was increased by 35 percent from the FAST Act, up to $79 billion in the new infrastructure law.

There is also a separate new program for repairing bridges that’s already been in the news after FHWA released the first batch of funding to states.

The $43 billion bridge formula program is “designed” to repair bridges, whether on the National Highway System or what are known as “off-system” bridges owned by counties, cities, or other localities. While states still have to come up with 20 percent of the cost for repairing the bigger NHS and other state-owned bridges, this program can cover 100 percent of the cost of repairing or rehabilitating these locally owned off-system bridges, to try and incentivize more funding toward these vital but smaller bridges—like the Fern Hollow bridge in Pittsburgh that just collapsed—which many states ignore.

Note: Thanks to the Washington Post’s Ian Duncan for noting that states can in fact use this repair program for expansion and building new bridges, according to FHWA’s guidance on the program:

While states are free to neglect repair needs on their roads, bridges, and highways, the new infrastructure law does uphold the much stricter existing State of Good Repair programs and requirements for public transit. (Yes, we require state of repair on transit, but not on roads and bridges.) The funding for both transit and rail repair grants was also increased dramatically.

How could the administration improve these repair provisions?

Unfortunately, the deal the administration struck with Congress limits the extent of their own authority. States control the bulk of the money, with no fix-it-first requirements. Yes, USDOT has urged states to prioritize repair (and climate, equity, etc.) with their huge formula programs. Some governors and AASHTO already responded to that modest request with shock at the suggestion, even though they know they retain the freedom to continue ignoring those needs.

But there are still things the administration can do. They can choose to prioritize repair and modernization (and climate resilience) within their large range of competitive or discretionary grant programs, and prioritize repairing transit/rail infrastructure in communities that need it most or have been historically underserved to serve their equity goals. USDOT could issue guidance or scoping requirements to include identifying climate threats (extreme weather, extreme temperatures) and the frequency the asset will need repair/maintenance based on the design. And they could require this for any project that undergoes a NEPA environmental review.

How can this advance our goals? How can advocates improve outcomes on repair?

When it comes to advocates and local leaders, the greatest potential is with increasing awareness, reporting, and accountability. For example, even though climate-related projects are now eligible for NHPP funds, governors, legislators or the DOT leadership may not realize it or may have zero interest in pursuing those projects. Further, there are very few states that have a pipeline of resilience projects ready to tee up. Advocates should fill that information gap to make the most of the new climate mitigation eligibility within this huge pot of cash, and focus on the projects that would protect and serve the most climate-vulnerable neighborhoods and people.

When it comes to passenger rail, as states (hopefully) create new interstate passenger rail compacts, some of the repair money for rail will be essential for getting them and subsequent new service off the ground. This would mean coordination across multiple regions and states to make those big projects a reality, as with the ongoing Gulf Coast rail project.

And lastly, you should be reaching out to every reporter on a transportation beat in your state to remind them of the promises that transportation agencies are making on repair.

When we go in-depth with a reporter who is new (or sometimes even a vet!) on the federal transportation beat, they are often shocked to learn there are no requirements for states to repair things first. Help bring your media along and give them actionable information to hold your decision makers accountable. They have just been given a nearly unprecedented windfall of federal cash for the next five years and have the complete freedom to spend it all on repair projects. If your state makes slow or no progress on repair (or does better in some parts of the state than others) that is due to spending priorities set by the governor, legislature and/or DOT.

Advocates and the media should be holding anyone who fails to move the needle in the right direction publicly accountable.

As one of our three core priorities, repair was one of our biggest disappointments in the infrastructure law. The last decade has shown us repeatedly that too often states use their flexibility to build new things they can’t afford to maintain while neglecting to properly address their repair needs. This is one of the most fiscally irresponsible things we do with transportation policy. Every dollar spent on a roadway expansion project is both a dollar that was not spent on repair, and a dollar that created decades of future repair costs. When Sen. Manchin talks about being concerned about costs passed to our grandkids, our current approach to repair should be exhibit A.

The administration should use every tool in their arsenal to ensure that the funds they control prioritize repair, while using their regulatory toolbox to nudge states and metros toward the same goal. Advocates can have some of the greatest impact by working to both publicize repair needs (including climate related projects) and hold their decision makers accountable for making progress.

With a massive increase in guaranteed federal funding coming their way, they have no excuses left.