01/23/2023 – In April 2021, the Tokyo Electric Power Company (TEPCO) in Japan announced its plans to initiate a pipeline dump of Fukushima’s radioactive wastewater into the Pacific Ocean. On September 22, 2022, a group of the foremost nuclear and marine scientists appointed as a panel by the Pacific Island Forum released an article in the Japan Times and made it clear that,

“We conclude that the present plan does not provide the assurance of safety needed for people’s health or sound stewardship of the ocean.” 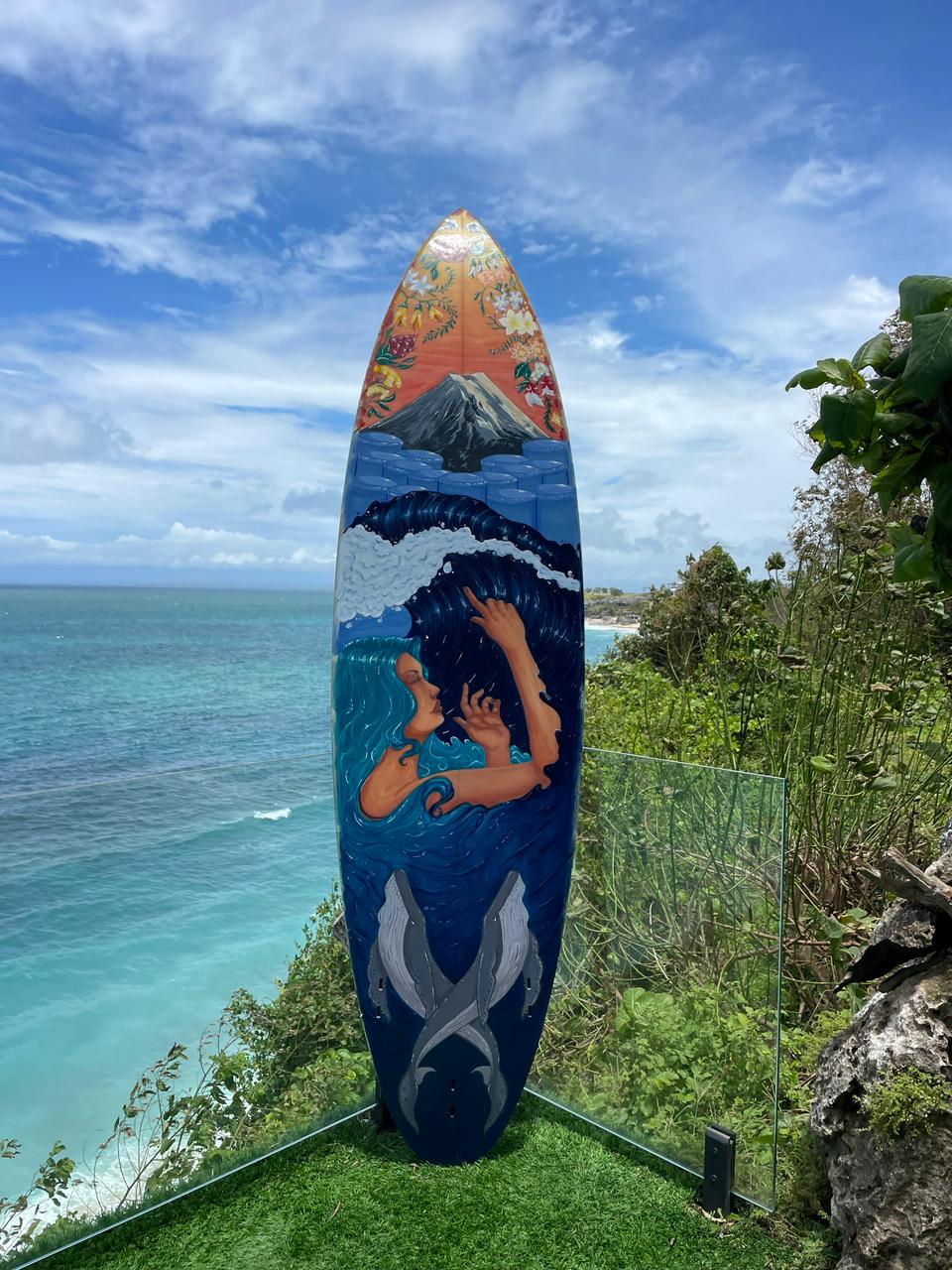 As a response, two organizations, Ocean Health Co-op and Mother Earth, began compiling an open letter to the Prime Minister of Japan and the Secretary General of the United Nations. The open submission reflects the public statements of concern by many parliamentary members, Sierra Club, Greenpeace, Nexus Global Youth Summit, and many more.

When she heard about the issue, 15-year-old eco-fashion designer Hanalei Swan said,”‘it broke my heart, and I knew I had to do something to take action.” She spent over 100 hours designing and painting the “Shima Swan Surfboard” for Ocean Health. The hope is that presenting the surfboard as a gift can open a conversation to ask TEPCO and Japan to reconsider this plan strongly.

Named for the Hawaiian shores, Hanalei is a surfer, too, and she’s really worried.

As fate would have it, she recently connected with Dr. Bob Richmond, a Research Professor and Director of the Kewalo Marine Laboratory at the University of Hawaii at Manoa, to learn more about the cultural, legal, economic, and scientific components of this complex issue. With the support of scientists, NGOs, political leaders, and business owners, the Swan family is currently in Japan and wants to encourage youth, especially locals and islanders, to educate themselves, talk to their parents, and get involved. 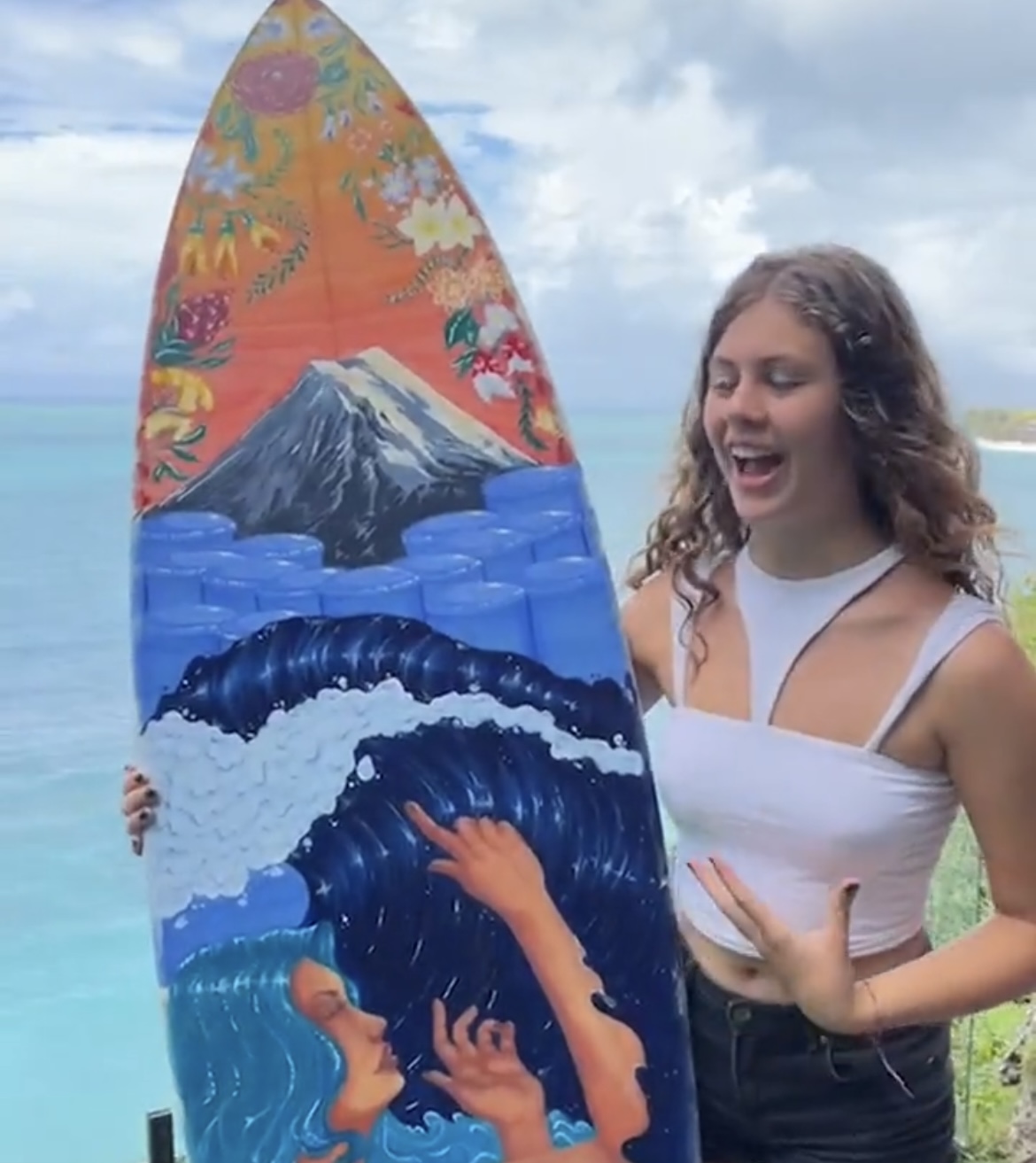 The Ocean Health Now! Campaign calls for the many organizations currently focusing on plastic pollution in the ocean and surfers, celebrities, and families to lend their temporary support to Hanalei based on the leading scientific recommendations for long-term human and ecosystem health. The surfboard she used as her canvas was generously donated by Ripcurl Asia. The design features the 16 native flowers of the Pacific Island Nations who would be most affected by the dump.

The Mother Earth team imagines getting the leaders of these nations, Indigenous elders, and other notable advocates to sign the surfboard. Wrapped in all this concern is a positive vision for a public water blessing and gifting ceremony led by elders from the Mundo Maya Foundation. They would like to present the Shima Swan Surfboard to Prime Minister Kishida, the CEO of TEPCO, and other decision-makers in Japan to consider this decision’s intergenerational and transnational effects on our children and grandchildren. This is an unprecedented opportunity to work together to review the alternatives and shape innovative solutions. We are the ancestors of the future.

The following organizations have endorsed the open letter: 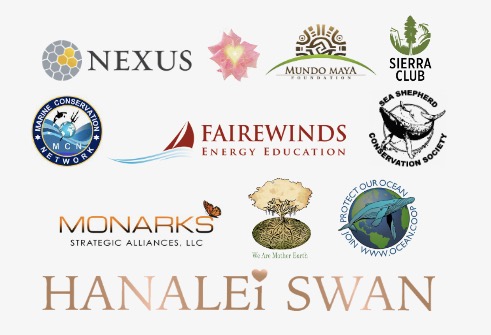 If you would like your organization to endorse the campaign and be included in the open letter, please send an email with your high-resolution logo and a short statement of support for the Ocean Health Now! Campaign, as well as an authorized decision-makers full name, email, and contact phone number.