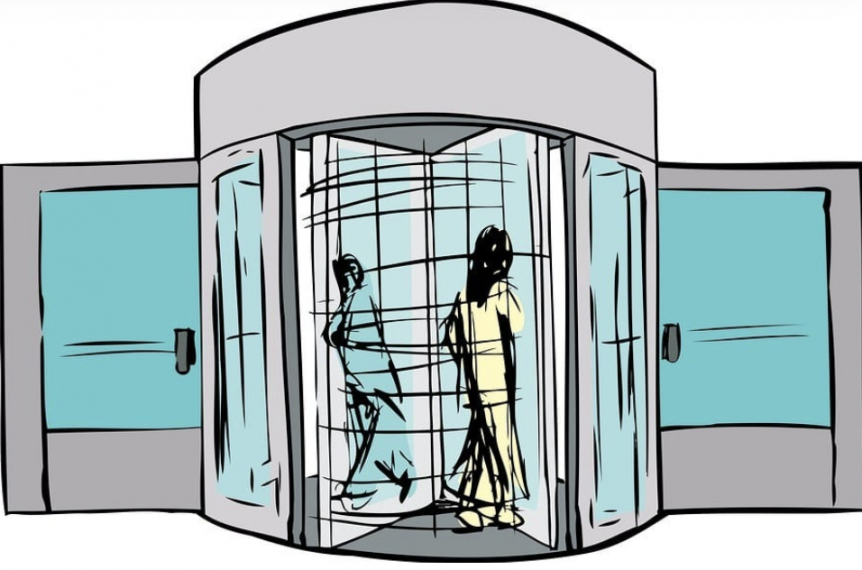 Happy Friday the 13th. While it may be bad luck to break a mirror, walk under a ladder, fail to forward that chain letter to 10 people, or visit a creepy summer camp, it’s not bad luck to walk through a revolving door to see all the latest agency moves, mergers, acquisitions, wins and launches. Hope you don’t have agency-induced triskaidekaphobia.

Chicago integrated marketing agency 9Rooftops welcomed Mandy Remeto and Leigh Ann Derringer as associate media directors at Cogniscient Media, a 9Rooftops brand. They are responsible for leading the development of media strategies and execution of media campaigns across channels for 9Rooftops clients such as the Maryland Lottery and Belle Tire.

Health and wellness ad agency AbelsonTaylor has promoted former controller Donald Dowd to vice president of finance. He joined AbelsonTaylor in 2006 and has more than 25 years of agency and corporate financial experience. Dowd will work with senior managers to optimize financial decision-making and support agency growth.

Global digital consultancy Appnovation has appointed Riccardo Zane to its leadership team in the Americas as vice president, business solutions. He will be responsible for leading the business solutions selling team and continuing to drive growth through innovative partnerships with existing and prospective clients.

Boston While Black, an inclusive in-person and digital membership network for Black professionals and students who are seeking connection and community, has relaunched on the one-year anniversary of its inception. While the network has been quietly building its membership list and creatively finding ways to support Black Bostonians during the pandemic, the official relaunch will set larger plans for the network into action. Boston While Black’s mission is to reimagine cities where Black people want to live, work and grow.

The acquisition will bring Greenlight’s expertise in digital advertising, including performance, SEO and ecommerce, to Brave Bison’s existing strengths as a social marketing partner, providing further opportunities for growth and a wider range of expertise to clients of both parties.

Digital media brand and creative agency Convicts has unveiled a new agency-client relationship and expanded leadership bench. The agency has partnered with clients on a purpose agency of record relationship, with new hire, managing director Ali Cornford, at the helm.

A former business director at agencies such as BBH New York, Droga5 and Anomaly, Cornford brings over a decade of experience to her position.

Deloitte Digital has tapped Kenny Gold as its new managing director and first head of social, content and influencer. Kenny most recently served as executive director of social media for WPP’s Grey Group in North America.

In his new role, Gold will help clients consider content and community as a part of every business decision. He will provide the expertise to activate social media across every touchpoint from marketing and commerce to internal communications and executive leadership.

The new role has been created in response to increased demand for ITB Worldwide’s influencer marketing service offering, which has increased by 50% year-on-year. Malachias was promoted from her previous role as business development director.

M&C Saatchi has appointed Rich Edwards as head of planning for its O2 business. Prior to a short break from agency life, Edwards was most recently executive strategy director at creative agency Iris, where he built and ran the integrated strategy team in London and led the development of the agency’s approach to customer and brand experience.

Media by Mother, the newly launched independent media agency from Mother, has hired Julie Lee as chief operations officer. In this position, Lee will take on responsibility for evolving Media by Mother’s activation platforms and media buying infrastructure.

Lee joins the Mother family from GroupM, where she served as managing director. During her 10 years with GroupM, she worked within Mindshare’s digital strategy department before successfully building the Chicago Maxus offering. When Maxus merged with MEC to form Wavemaker, Lee expanded her responsibilities beyond Chicago to include leading the Costa Mesa office as well as responsibilities for teams in New York.

SWR (South Western Railway) has appointed St Luke’s as its lead creative agency following a competitive pitch, held entirely remotely. SWR handled the review with the AAR, and it involved a final stage three-way pitch including the incumbent, Engine.

St Luke’s remit for SWR will include development of a new brand creative platform and creation of all ATL communications, including commuter and leisure travel campaigns.

Ricardo Trejo has joined Walton Isaacson from VMLY&R/Red Fuse as executive creative director and will lead the agency’s creative teams across all clients, including Lexus, McDonald’s, and JPMorgan Chase, along with new business, and pro-bono initiatives.

Trejo is part of the latest round of leadership team expansion and promotions at Walton Isaacson. Also joining the agency are: Jamila Price, digital media director, who joins from Publicis Groupe; Tim Wright as senior head of human resources from GP Generate; and Alex Haglund as associate art director.

‘We are all left wondering who is making these decisions and what are the criteria on which they are based?’