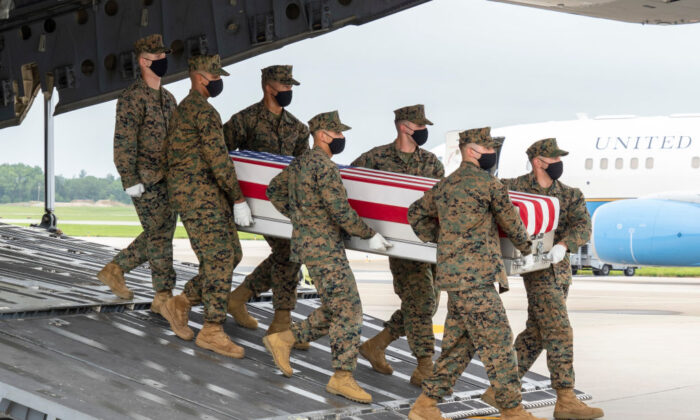 COVINA, Calif.—A public funeral service was held at Forest Lawn Covina Hills on Sept. 26 for Marine Lance Cpl. Dylan R. Merola, who was among 13 service members killed in a suicide bombing in Afghanistan.

Merola’s remains were carried in a procession Tuesday from Ontario International Airport and through the streets of his hometown of Rancho Cucamonga—including a pass by his alma mater Los Osos High School—eventually arriving at Forest Lawn in preparation for Sunday’s services.

Thousands of people lined sidewalks and freeway overpasses along the procession route, many of them holding American flags.

“It’s a sad day,” Upland resident Mark Bertone told NBC4. “I have a son who spent eight years of his life in and out of Afghanistan. Part of me feels blessed that I still have him with me.”

Merola, 20, died Aug. 26 in the attack at Kabul Airport that also killed 10 other Marines, a U.S. Navy corpsman and a U.S. Army soldier, along with more than 100 Afghanis.

Two other Southland Marines—Lance Cpl. Kareem Grant Nikoui, 20, of Norco, and Cpl. Hunter Lopez, 22, of Indio—also died in the attack.

“You got these young kids—19, 20, 21 years old, they show up to work to help over a hundred thousand people escape the tyranny of the Taliban and they’re gone,” Bertone said.

The public funeral service for Merola was scheduled for 2:30 p.m. Sunday at Forest Lawn mausoleum, 21300 Via Verde St., followed by a private burial service.