Embraer executives launched their new Energia family of four aircraft concepts in various configurations that will be use electric and hydrogen-powered propulsion systems during a live-streamed unveiling ceremony on Nov. 8 from its headquarters in São José dos Campos, Brazil.

Development of the Energia family aircraft is still in its earliest phases for Embraer, which has partnered with “an international consortium of engineering universities, aeronautical research institutes, and small and medium-sized enterprises” to understand the energy harvesting, storage and thermal management challenges they will need to overcome with the new concepts. Details regarding the new aircraft were released following another recent live webcast held by the Brazilian airframe manufacturer in August where an overview was provided of their vision for a next generation turboprop aircraft with rear-mounted engines.

On Monday, the company provided performance targets and a timeline for entry into service for each of the planned Energia variants.

“There’s no easy or single solution in getting to net zero. New technologies and their supporting infrastructure will come online over time. We’re working right now to refine the first airplane concepts, the ones that can start reducing emissions sooner rather than later. Small aircraft are ideal on which to test and prove new propulsion technologies so that they can be scaled up to larger aircraft. That’s why our Energia family is such an important platform,” Luis Carlos Affonso, Embraer’s Sr. VP of Engineering, Technology and Corporate Strategy said in a statement.

According to details provided by Affonso during the live-steamed unveiling, all four aircraft will use a rear-mounted engine design with a range of varying sizes that incorporate different propulsion technologies – electric, hydrogen fuel cell, dual fuel gas turbine, and hybrid-electric. Below, are the images and details of each aircraft that Embraer has planned to include in the new Energia family of aircraft. 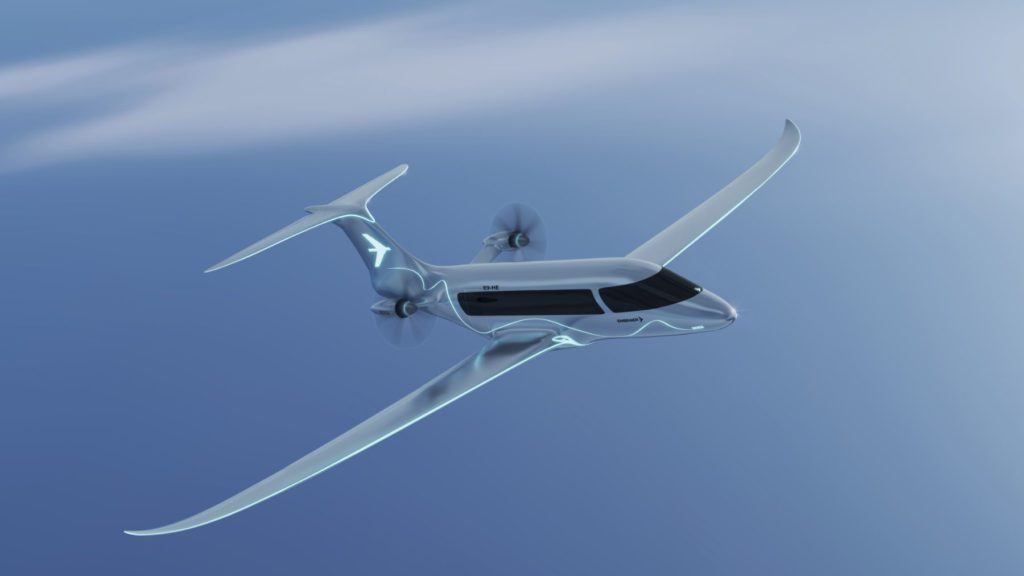 The E9-HE is the hybrid electric Energia variant that will use parallel hybrid-electric propulsion and feature a range of 500 nautical miles (nm). Affonso said the E9-HE’s propulsion system will rely on a single piston engine and two electric motors. The electric motors operate during takeoff and climb when a boost in power is needed, and once the aircraft reaches cruising altitude, the motors are turned off and the small piston engine continues to operate.

“From our initial studies the electric motors could be air cooled decreasing the complexity of the thermal management systems,” Affonso said.

Embraer is projecting “technical readiness” for commercial service by 2030 for the E9-HE. 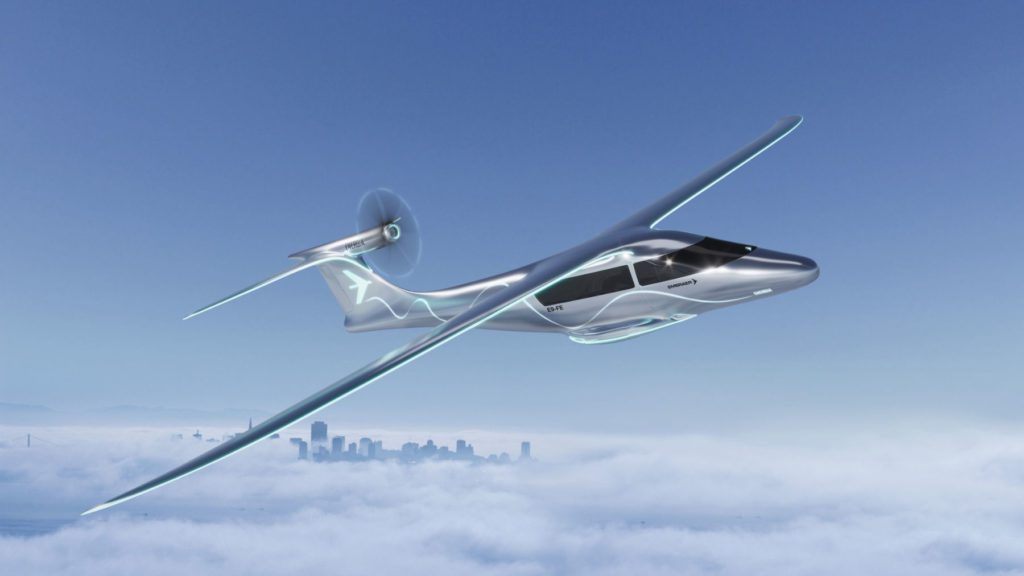 The E9-FE will also feature nine seats and is the first all-electric aircraft in the Energia family, with a planned range of 200 nm. Powered by batteries that are located in the nose of the aircraft and a single rear-mounted electric motor, the E9-FE will have zero carbon emissions, according to Affonso. Technical readiness for the E9-FE is expected to be ready for entry into service by 2035. 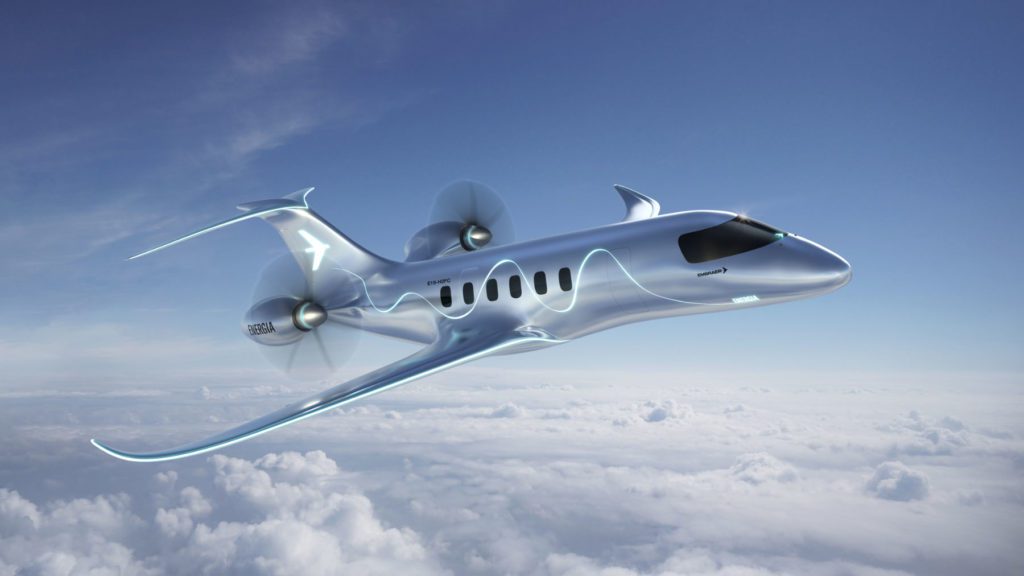 The 19-seater hydrogen fuel cell-powered E-19 H2FC is among the most unique new configurations unveiled by Embraer, with a a range of 200 nm that Affonso said can be extended “as required by customers.” 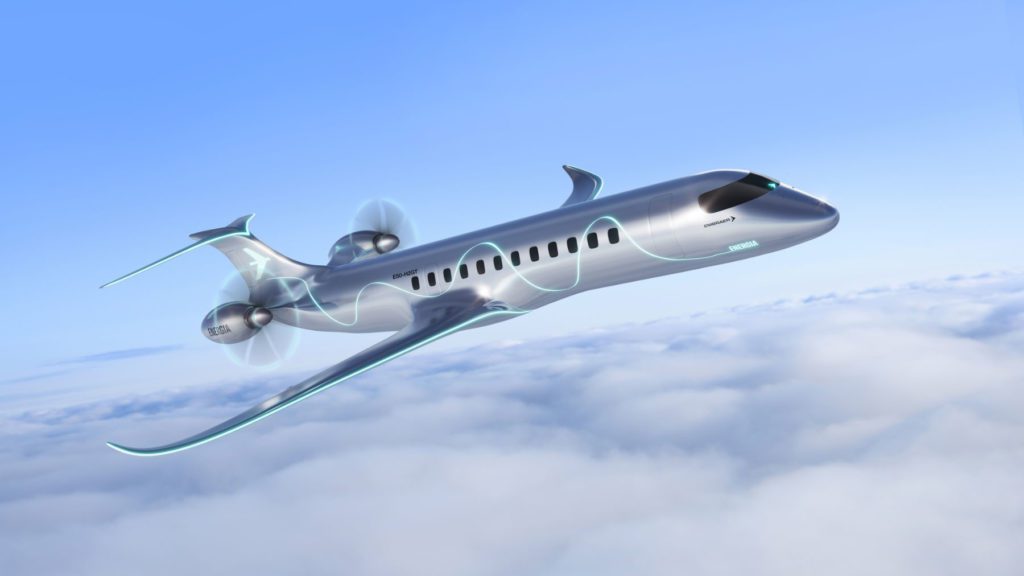 The most ambitious among Embraer’s Energia family aircraft concepts is its largest planned variant, that uses a “dual-fuel” propulsion architecture that will be capable of powering a gas turbine with either hydrogen or sustainable aviation fuel (SAF). Embraer notes that the E50-H2GT will have seating for 35-40 passengers and a range of 350-500 nm.

“Unlike the other concepts, this aircraft does not have an electric motor or a battery, instead it uses dual-fuel gas turbine propulsion. On short missions, on short ranges below 350 nm, 100 percent hydrogen energy can be used for longer routes, SAF or Jet-A will be used,” Affonso said.

Embraer is projecting a 2040 entry-into-service date for the largest aircraft in the Energia family.